It’s a new week, so time for a new Raw Till 4 recipe!  One of the challenges (for some) in living this lifestyle is the redundant food choices.  I’ve talked about this before, I am very lucky in that I can alternate the same 3 meals over and over again and seldom get tired of them.  I’m talking about the cooked dinners here.  But sometimes I try new things and this time it was vegan gravy for my baked potato fries.  It was surprisingly good!

I have raved in the past about how good Freelee’s sweet chili sauce is with the baked fries.  I wasn’t craving the sauce last night, so I decided to try a (VERY) simple vegan gravy recipe I had read about on the Raw Till 4 facebook group here over the weekend.  There was no recipe given but it was just mushrooms and organic vegetable broth.  How hard could it be right?

I do plan to play around with the ratios next time, but I gotta say, it was delicious!  This Vegan Gravy recipe is super easy and quick to make.  So here is what I used to make enough gravy to cover 2 pounds of delicious crispy no oil baked french fries:

Add broth and mushrooms to pot, and bring to boil.  Then cover, turn down to low and simmer for 15 to 20 minutes, stirring occasionally. You can do all this while your potato fries are baking in the oven.

Once your potatoes are almost done you can pour your mushroom/broth mixture into a blender and blend on high for about 30 – 45 seconds, until smooth.

And that is it.  Now you can either pour the gravy in a bowl for dipping your fries, or you can do what I did, and just pour the gravy all over those tasty fries in a big bowl.

Just a little sidenote on the vegetable broth, I used the full salt version, as my store rarely seems to carry the low sodium version.  I wasn’t super concerned about it as my sodium intake is EXTREMELY low, so the 500+ mg of sodium from one cup of broth was not a big worry for me personally.  You can certainly use the low sodium broth if you desire.  I found the gravy just the right amount of salty.  After that gravy, my sodium intake for the day was 620 mg, way above my normal daily intake, but still at the low end of the raw till 4 principles.

Here’s a little Raw Till 4 Vegan Gravy recipe card below.  Feel free to share it on Pinterest! 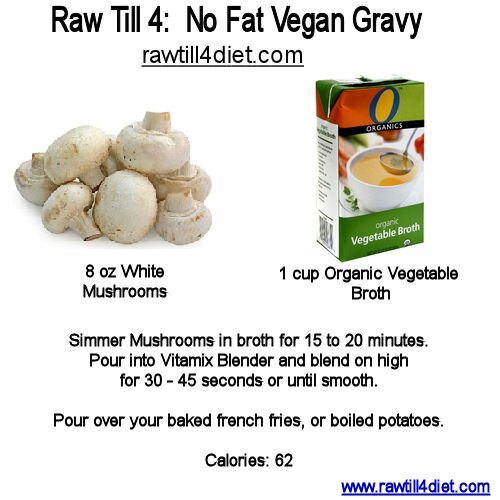 One Response to Vegan Gravy – Mushrooms and Broth